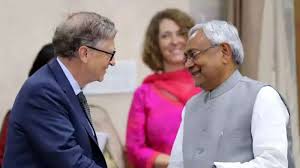 Bill Gates was all praise for Bihar Chief Minister Nitish Kumar. The billionaire philanthropist met Nitish Kumar in Patna and a day after the meeting in Delhi praised Nitish Kumar for acknowledging the climate change as the biggest problem.

What did Bill Gates say about Nitish Kumar?

Bill Gates said that he didn’t expect the Bihar CM to speak on climate change and was impressed when Nitish Kumar talked about climate change. He further said that Mr. Kumar was aware that the problems the farm sector was facing were due to climate change.

Gates is the co-founder of the Bill & Melinda Gates Foundation. He said that the CM had worked with his foundation and that he knew Nitish Kumar for over 10 years. It is to be noted that the Bill & Melinda Gates Foundation has been working on several social welfare projects including education in India. He also met with Union Minister Smriti Irani in Delhi.

Nitish Kumar government has started “Jal Jeevan Hariyali” programme to recharge natural water resources and plant trees to contain the ill effects of climate change. He even called a special session of Bihar assembly to … Read the rest