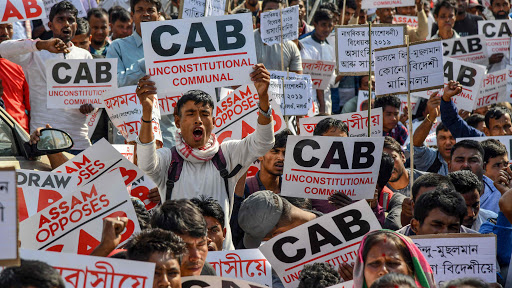 In Kerala, a bridegroom led his marriage party holding a placard with anti-CAA slogan. The incident was reported from Thiruvananthapuram. The groom was Haja Hussain and he was a riding a camel with anti-CAA placard in his hands.

A bridegroom protested against CAA

Haja Hussain, the bridegroom, arrived at the wedding venue in Vazhimukku about 20 km from Thiruvananthapuram with anti-CAA placards in his hands. He was riding on a camel and accompanied by his friends and relatives in large numbers. The placard in his hands read “Reject CAA, Boycott NRC and NPR”.

Haja Hussain said that he opposed CAA and chose to highlight his protest in a unique way. Finally, he decided to go to the groom’s house protesting against CAA. But it wasn’t all. He had more plans to show his protest. He would give his wife a copy of the Constitution of India in addition to the Meher. In Muslim wedding, bridegrooms give gold of money to bride. It is a tradition called Meher in Islam.

Haja Hussain is a local businessman and like many other people, he is also opposed to the controversial … Read the rest