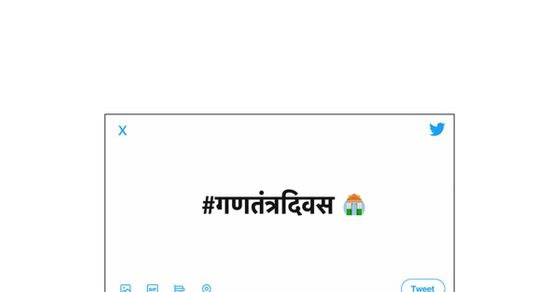 Twitter launched a new emoji to mark the momentous occasion of the 71st Republic Day of India. The micro-blogging site has made a Tricolor India Gate as the nation gears up for Republic Day celebrations.

The especially designed emoji shows the India Gate lit up in tricolor as if it is paying homage to the grand Republic Day parade on Rajpath. Twitter said that the emoji would be live until January 30, 2020 and it would be available in English and ten Indian languages including Hindi, Tamil, Telugu, Kannada, Malayalam, Marathi, Bengali, Gujarati, Urdu and Gurmukhi.

This is fifth-time that Twitter is celebrating the Republic Day with an emoji. Earlier, it had supported other important days and festivals like Independence Day, Gandhi Jayanti and Diwali. Also, it came out in support of social issues and big events from time to time.

Twitter India’s Mahima Kaul, Director, Public Policy, India and South Asia, said that they believed that the 2020 Republic Day emoji would resonate with Indians across languages, cultures and time zones providing them yet another reason, and way to celebrate and … Read the rest