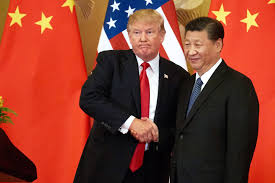 US President Donald Trump said that he took a momentous step that was never taken before with China. He signed a … Read the rest