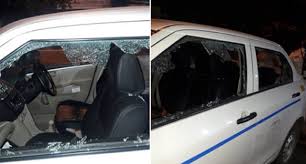 A SpiceJet pilot was robbed, attacked and left bleeding in middle of the night in South Delhi. The incident happened on a flyover close to the Indian Institute of Technology in Delhi. The pilot called the police after the assailants had fled.

Yuvraj Tewatia is a flight captain with SpiceJet. He was going to airport at 1 am in his office car when he was intercepted by 10 people. They were on five scooters that they used to block the captain’s car. They were carrying weapons for the robbery. They smashed the car window and one of them hit the captain on head with his pistol.

After broking the car window and hitting the captain, they looted the Rs. 34,000 cash the captain was carrying and other valuables and fled. Again, one of them injured the captain with a knife and left the captain bleeding in his car. It is only after they had fled that the captain made a police complaint.

The pictures of broken car windows with a detailed account of the incident went viral over the social media. It highlighted a grave concern for … Read the rest